Posted on April 11, 2011 by adventuresofaleece

During the second weekend of April, everybody in the Vallée de l’Ubaye was happy to take advantage of 75 degree weather and strong, clear sunshine.  Summer had come early!  Social events multiplied, and it seemed to me that Barcelonnette was waking up.

Friday night, after about five hours of pie-baking, I had a late picnic with Francesca, Mariangela, Emilie, Stéphane, and Olivier, who had his guitar on hand.  After several reprises of the Sound of Silence, a few Cat Stevens tunes, and You’ve Got A Friend, we eventually sauntered over to Le Choucas bar, where there was a concert “en live“.  The first and only concert I saw in Barcelonnette! The group was the Oaï Notes (a play on words: pronounced “why not” and referencing the old-fashioned verb for “to hear,” ouïr). 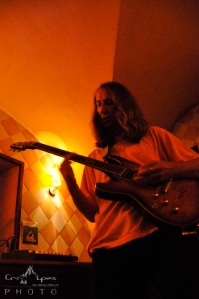 The name of the group gives a good indication of the pleasing combination of humorous self-deprecation, serious musicianship, French rock, semi-English lyrics, sweat and energy that they brought to the gig. The audience mirrored this delightful hodge-podge.  Parents, kids, shopkeepers, chairlift operators, teachers, teaching assistants, tourists–all of Barcelonnette was represented.  Everyone was movin’ and groovin’ to the music, and inhibitions were left behind.  In order to accommodate this unusual occurrence in the back room of the bar the pool table was pushed aside, with sound equipment and guitar cases piled on top, and the listeners were jammed together in the hallway and on the couches.  It was tight, but in the best possible way. 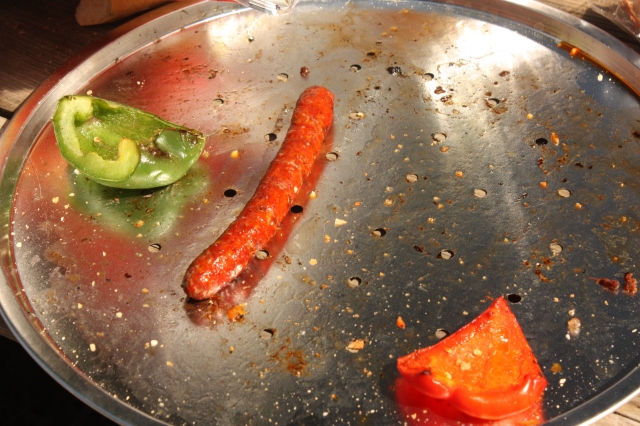 The next day I had a goodbye picnic next to the Bachelard river.  It turned out to be a brilliant day, and thanks to everyone’s generosity we had overflowing tables of merguez and chipolata sausages, salads and desserts.  Teachers came with their families, so there was a whole gang of kids playing in the woods and the snow-melt water. 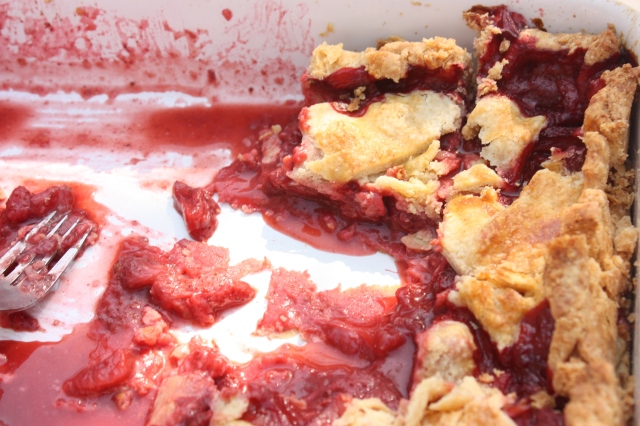 Friday afternoon had yielded a strawberry balsamic pie, an apple pear ginger pie, and an apple pear pie.  In my role of ambassador of American culture, I had to stipulate that apple pear ginger and strawberry balsamic were not exactly traditional pie fillings.  I did not have any trouble convincing picnickers to try them, though, and they were a big hit.  Now, thanks to my efforts at the high school, Thanksgiving, and at this picnic, a significant proportion of the population of the valley knows what a pie is!  One small step for man…

People kept asking me whether I was itching to leave and go home.  But while I was dying to see my family, it was hard to leave those sunny April days and the sunsets that followed them.  Flowers were coming out, but snow was still glinting on the mountains around us. 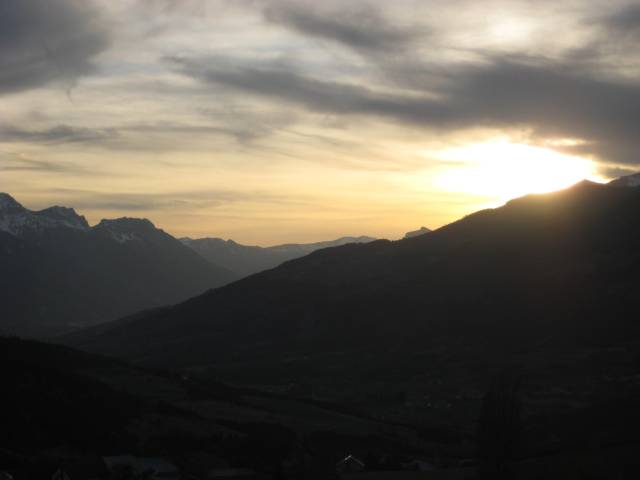 Picnics, sing-alongs, walks on country roads, beers with friends outside in the central square…it was an idyllic couple of weeks.  But since I knew that time was running out I determined to finally do all the things I had been meaning to do in the Valley.  Some of these, such as getting a chance to peer in at one of the communal ovens I had heard about, happened by chance; others required a little doing.

Ever since I had seen the sign that said “Vente de lait 18h15-19h15” I had been hankering to buy milk from the farm that thus advertised along the road from Barcelonnette to Jausiers.  This was finally accomplished on April 13th.  I was walking in Faucon de Barcelonnette when suddenly I realized that it was cow-milking time.  I hurried over to the nearby farm and arrived just at 19h15.

After buying a liter of milk  from the farmer, (poured into a recycled Hepar mineral water bottle), I visited the cows for a few minutes, each of whom had a unique twist to her horns.

I had also long been hoping to visit the Tron family farm, where the 28 year-old twins Nicolas and Christophe make all sorts of sweets and baked goods.  In February I had been foolish enough to go skiing when Francesca, Mariangela and Lauren went to visit the “laboratoire.”  I had to rectify this mistake, and so on the afternoon of April 15th I called Nicolas up and invited myself over. 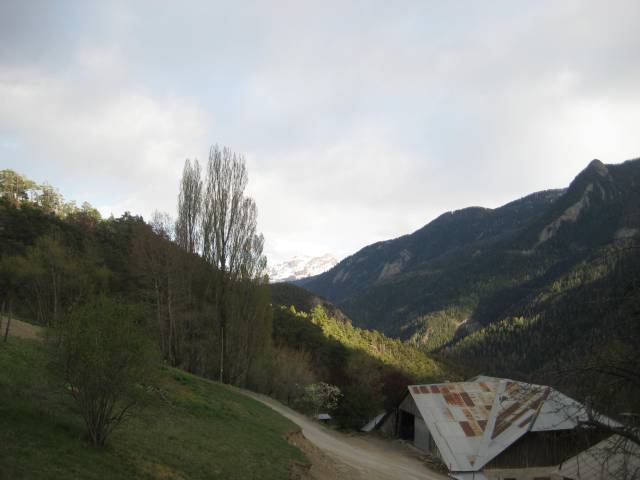 The brothers were kind enough to let me intrude on their work, tour their fields, and ask lots of questions.

They live slightly down the valley, but up the mountain side, so they are at an altitude of about 1100 meters with Southern exposure.

Spring flowers at the Trons' farm in Méolans-Revel

Over the course of the afternoon visit, the brothers filled me in on the story of their business.  Their parents have always raised sheep, and when the price of lamb was down and they needed some extra income they began making jam with the wild fruit in their backyard.  Nicolas and Christophe studied engineering, but after their studies they decided to move back home and take over the jam business.  They realized that they had to diversify so that they could have business all year round, so Nicolas went to pastry school and completed an internship at the local pastry shop, and they began producing tarts, macarons, pâtes de fruit, and bread, and expanded their line of jam to include 26 different flavors.  They sell their products at Barcelonnette’s market and supermarket, other nearby markets, and in the “maison de produits de pays,” a retail outlet for local products.

The brothers’ work ethic is unceasing, so even during my visit they got a lot done. They put me to work, too, assembling the macaron cookies filled with raspberry jam that they would be selling the next day at the market.  Nicolas had made the delicate macaron shells at 5 o’clock that morning.  He explained that they only make these labor-intensive cookies for special holidays such as Easter and Christmas.

The last item on my list was to take photos with vendors at the farmers’ market.  I had always been a little too shy to interrupt their business and ask for a photo with them, but they played such an important role in my Barcelonnette experience that I couldn’t leave town without engraving their images on my computer’s hard drive.  This was accomplished on Saturday April 16th at my final Barcelonnette market, where I bought enough jam to make my suitcase entirely unmanageable and enough cheese to last throughout my whirlwind tour of Digne les Bains, Moustiers Sainte-Marie, Forcalquier, Avignon, Arles, and Aix. 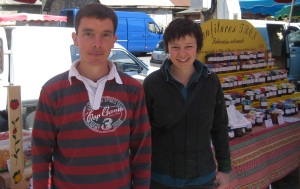 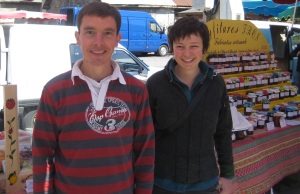 And like that, I left the Valley of the Ubaye a happy woman, without regrets.  I sincerely hope to return someday to visit all my friends, ski at Le Sauze, and drink a Grimbergen outside Le Choucas.  And one day, I hope to be there at the right time to pick some of the Tron family’s famous raspberries and taste them before they get made into jam.