Posted on May 1, 2012 by adventuresofaleece

In March of 2011, my grandmother, Nonnie, packed her suitcases and flew to Barcelona with her friend Nancy.  After a few days visiting museums and rambling down Las Ramblas arm-in-arm (to look more Spanish and therefore avoid pickpockets) they hopped on a train and headed for Nice, where their friends John and Michèle Horton live for half of the year.  I had visited John and Michèle in December, on my way to Rome with Michela, and I was very excited to be invited back in March to spend the weekend with Nonnie, Nancy, and the Hortons.

After a long bus trip from Barcelonnette to Digne and from Digne to Nice, I arrived at the new Gare Routière in Nice, just a few minutes away from the Horton’s house.  I took a minute to enjoy the sunshine and the Mon Oncle-esque rowhouse sticking up taller than the rest, and the next thing I knew Michèle’s little car was zipping around the bend and there was Nonnie!  For six months, I had only interacted with my family through the telephone and Skype, so it sure felt good to get a hug and a kiss from Nonnie, and to be called “schnooky” again.

Michèle drove us the short distance from the bus station into her town, Villefranche, and then up the incredibly steep hill to her house, which her father built when she was a child. Look at the view! 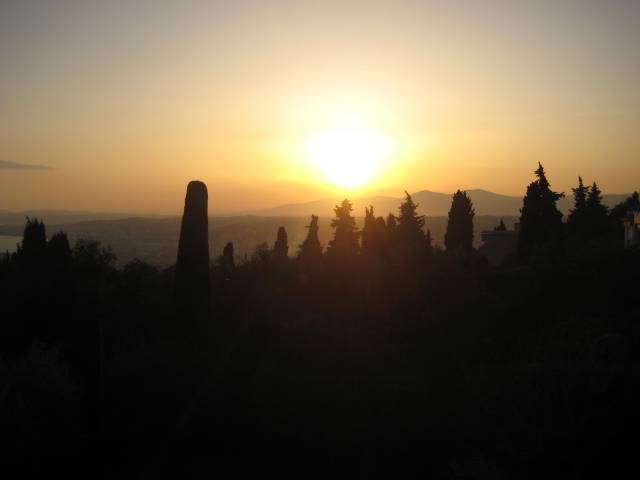 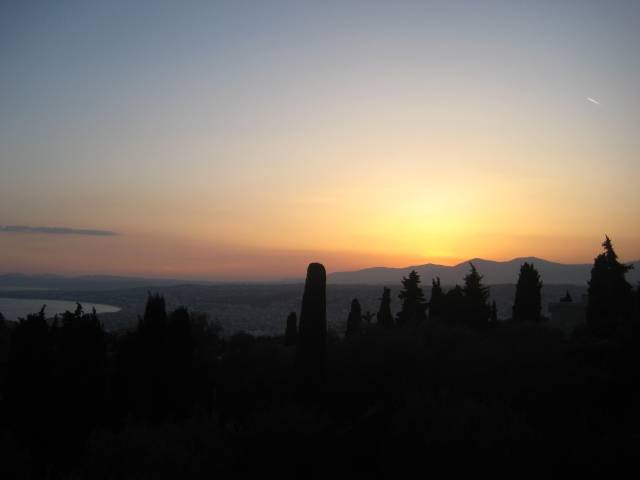 We proceeded to have the most wonderful weekend together.  One evening, Michèle invited us to join her for an English-language bookclub meeting at her friend Nicole’s house just up the chemin.  Boy, were we in for a treat!  Nicole’s house is a recognized architectural landmark–an example of mid-twentieth century design.  Nicole gave us a complete tour.  The building was made of concrete, but the house felt warm and welcoming.  In the kitchen everything was bright red.  It was built in the 80s, but I felt like I had entered a hybrid of To Catch A Thief and North By Northwest.  The only way I can describe it is as a modernist concrete Riviera hunting lodge.

I really enjoyed speaking to our hostess.  She has a daughter who lives in Brooklyn and she herself spent a year in the U.S. as a young woman, so we talked a lot about what it’s like to live in a foreign culture, and the possibilities and impossibilities of assimilation.

In the morning we took a drive across a few borders.  From France, through Monaco, and into Italy.  Driving along the Grande Corniche may have frightened Nonnie a bit, but I felt like we were the Jetsons, zooming along a space-age highway.  When we arrived on the ridge along which the Grande Corniche runs, we could just see the Alpes to the north.

In San Remo we made for the well-known marketplace.  Many French come to San Remo for the markets, so we heard a mix of French and Italian all around us.  Outside there were clothes and housewares and linens.  Inside there were zucchini and fresh artichokes, pesto, salami, mozzerella di buffala, burrata, pecorino… You can probably guess where I dragged Nonnie.

The artichokes had their stems and leaves still on, and the vendors stood at their stall, with thick gloves on, chopping off the spikes. 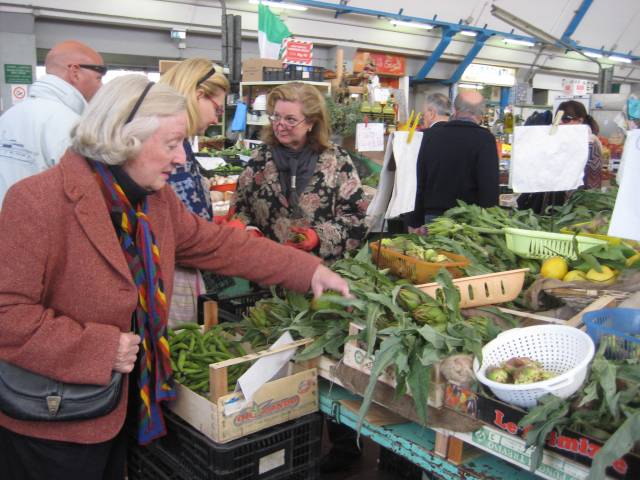 Once we grew tired of the market and had made a few purchases, we headed out into the sunshine to find a place to eat.  I tested everybody’s patience, I think, as we looked for a restaurant, because I didn’t want to fall prey to a tourist trap.  I tried to follow my instincts to some good food. 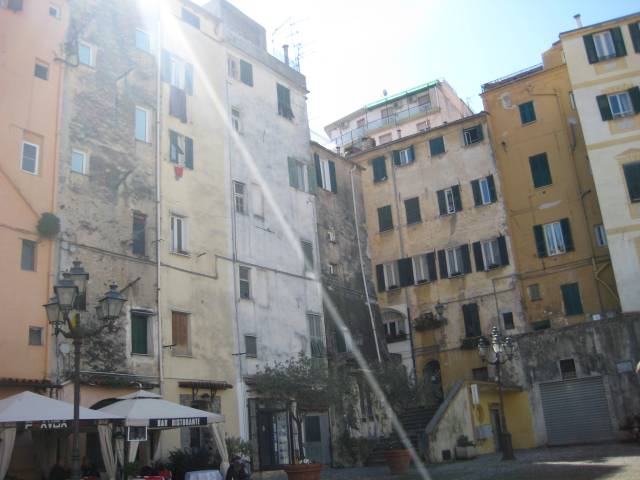 They led us down a little street off of one of the big piazzas, and there we happened upon Cibi & Libri, or Food & Books.  It was a tiny little bookstore and restaurant, with no more than five tables in the place.  We enjoyed the undivided attention of the owner, who was a very welcoming and informative host, and some delicious lunch. 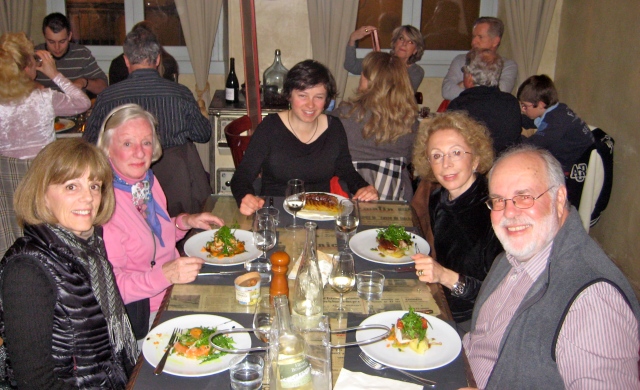 That evening, Nonnie had arranged with Michèle to go into the center of old Nice for dinner, to celebrate my birthday.  Michèle knew just the spot, Le Bistro d’Antoine.  We were led through the bustling restaurant up some stairs and into a lovely little dining room. 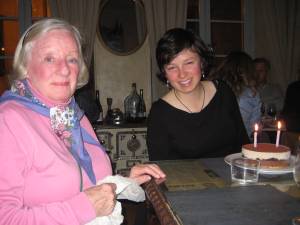 We even had cake!

We ended our weekend with a rainy-day stroll down to the water in Villefranche.  Michèle explained that this was a very important port for the Allies at the end of World War II.  We walked around an old fort, where the town hall now resides, and found a chapel decorated by Jean Cocteau. 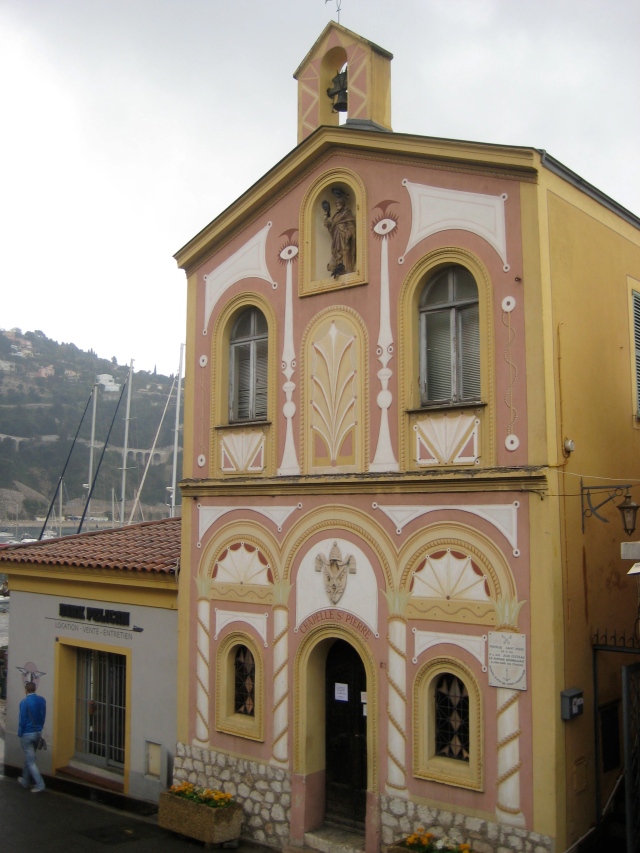 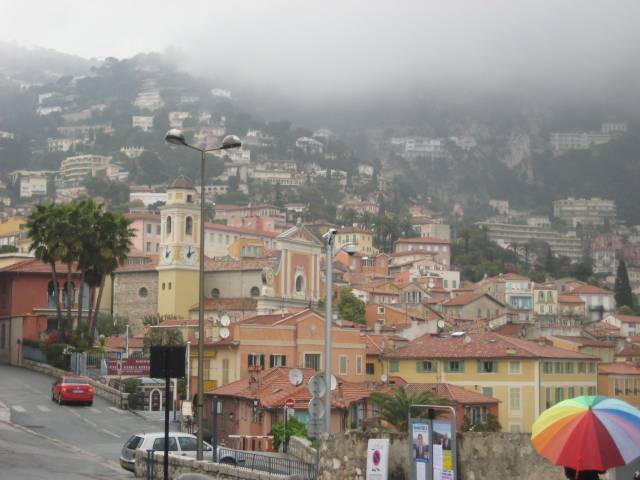 I discovered that Villefranche is very photogenic in the rain! 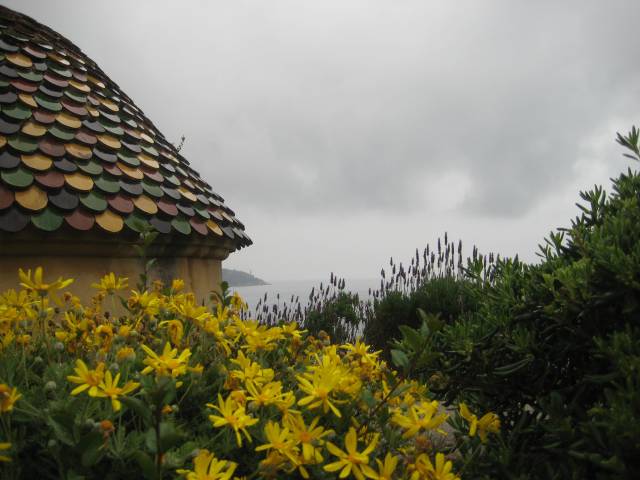 Senior Project Manager at The Working World, a non-profit CDFI with an investment fund that focuses on loans and equity investments for worker-owned cooperative businesses. Recently graduated with an MA in Urban and Environmental Policy and Planning from Tufts University. Formerly Executive Director of the BerkShares local currency program in Western Massachusetts and Director of Programs at the Schumacher Center for a New Economics. Former line cook and prep cook at Txikito Cocina Vasca. Writer, teacher, and traveler.
View all posts by adventuresofaleece →
This entry was posted in Uncategorized and tagged architectural landmark, italian markets, Nice, San Remo, twentieth century design, vielle ville, Villefranche. Bookmark the permalink.