Christmas in a foreign clime

Posted on January 28, 2011 by adventuresofaleece

Sometimes my all-too-literal mind has a hard time understanding homesickness.  How can a place exert such a force on one’s mindset and emotions?  If you are well-fed, clothed, clean, and surrounded by people, how can you long to be somewhere else where you will be just as warm, well-fed, and clean, just because it’s where you came from?  If we were just rational beings then homesickness wouldn’t exist, I think.  In the last month I’ve been struggling to be more rational, for in fact I’ve been lucky enough to have adventures in Nice, Rome, Grenoble, (and lots of places in between).  And yet, I often find myself yearning to sit around the fire with my family in South Egremont.  I think winter, especially, induces homesickness.  To me, winter is not the time to go adventuring, but the time to stay at home, sing, cook, and read, only going out to ski.

When I asked a friend (who is also an English assistant) for advice on avoiding boredom and homesickness he gave me the following wise words:

“get off your computer. read a book. every morning, just read. at night, go exercise. no excuses, just problem-solve.”

Then, while unwrapping an Italian chocolate after dinner this evening, I found a smiley face making the ‘A-Okay’ sign with his fingers, telling me “Persevera e presta attenzione.”  In other words, “Persevere and pay attention.”  With smiley faces and old friends giving me such good advice, and with the ski trails awaiting, I think I’ll be fine.

Happily, I’ve actually been singing, cooking, reading, and skiing–European fashion–quite a lot this past month.

It all started on a snowy Friday in December.  The day after I wrote my “Sanksgiving”post, in fact.  Now this was a day to stay home.  But we couldn’t!  We had to get to Nice so that we could fly to Rome on Saturday!  So Michela and I put our trust in the SCAL bus drivers and boarded the bus in a flurry of fluffy new snow and by the light of the early morning street lights.  We made it to Digne, but when the driver stepped into the bus that was meant to take us to Nice he made the baffling announcement that we might only be able to go as far as the next town.  Lacking any alternative, we crossed our fingers and Michela remembered that it was Friday the 17th, a bad luck day in Italy.

our train des "pignes" (pine cones) had only one car.

Though we did get past the first town, the Gendarmes flagged us down in the next town, St. André les Alpes, and the bus driver informed us we would have to wait three hours for the “train des pignes” to carry us onward to Nice.  Though we spent most of the time sitting in the cold train station I did explore enough to make one discovery–a deer head in a dumpster!  I had an overwhelming fear of getting a whiff, otherwise I would have taken a picture for the blog.  Sorry, folks.

When we finally got to Nice we had to adjust our outlook on life.  Here, the light was not muted by snowflakes into grays and whites, but refracted into blues and oranges and reds by brightly lit Christmas trees and palm trees.  And what is best, we had hosts!  Michèle recovered our weary souls at the train des pignes station and drove us up and up to Villefranche, where John had prepared a sumptuous leg-of-lamb dinner for us!  I think that was my first leg of lamb, believe it or not.

When we woke up in the morning we were sitting pretty on the Corne D’Or, and we had all of Nice laid out below us.  Michèle took us down into the city to see the famous flower market (you know, the one featured in To Catch a Thief) and walk around the old part of the city.  We tasted Socca, a chickpea pancake that’s cooked in huge round pans at the markets (and which I recently learned is one of Mark Bittman’s favorite foods), and tourte aux blettes, the Niçoise specialty that can be savory or sweet and is made with a local kind of swiss chard.

After our luncheon, after chocolates, and after limoncello made from John and Michèle’s own lemons, we had to go back into travel mode, and wait around for our EasyJet to arrive from snow-bound Amsterdam so that we could continue on to Rome. 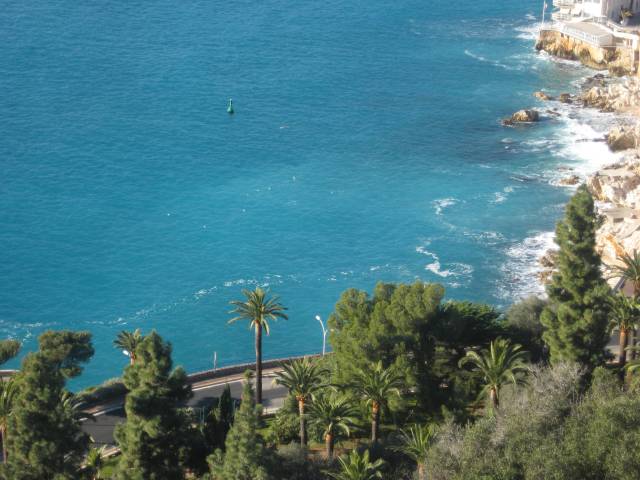 In Rome, we didn’t always have the sparkling weather we had in Nice, but when it was sunny it sure was spectacular!

Why do lampposts always make me think of Jacques Tati, even when next to Roman ruins?

On these fair-weather days, I spent a lot of time strolling around with only a vague sense of purpose, enjoying the contrast of the buildings and columns against the sky. 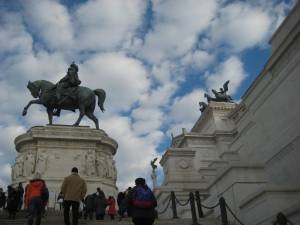 The Spanish Steps, the Pantheon, Piazza Navona, Castel Sant’Angelo, the Fontana di Trevi, I got to see all of them at different times of day and night, on sunny days and cloudy days, and in the case of the Vatican, at sunrise!  I spent whole afternoons wandering from one bookstore to another, “window licking,” as the French would say–looking at beautiful leather bags, stationery, and antiques shops–and reading graffiti.

I think I'd agree, Romans are mods, not rockers

The view from under the Christmas tree in Via del Corso

I only ate in one restaurant during my trip, because the rhythm of our days and eating habits made restaurants superfluous.  During a jaunt in the center of the city you need only look to street food to sustain yourself.  Quality and variety are highly satisfactory.  Panini, suppli, roasted chestnuts, gelato, coffee, even freshly picked clementines, all took their turns in tiding me over until I got to Michela’s (or her aunt’s) house for a late Roman dinner. 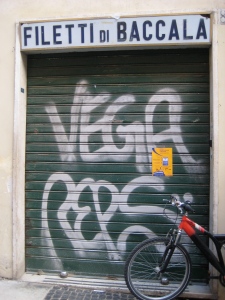 Fried cod filets that I didn't get to try.

One afternoon, at Michela’s urging, I bought a veritable Porchetta di Ariccia sandwich at the Christmas market at Piazza Navona, and delighed in the salty, herb-infused pork as we walked onward to a gelato at Giolitti.  On another day, when I was on my own, I finally tried roasted chestnuts and decided they are the perfect street food: warm, hearty and satisfying, and no mess!  Suppli, the rice balls that I’ve always loved at Esposito’s in Brooklyn, on the other hand are warm, extremely filling, greasy, and messy with breadcrumbs–buy them only when you are very hungry!

I believe that gelato at Giolitti (which involved three flavors plus whipped cream) was one of only two gelati on this trip to Rome.  There were so many other sweets raining down on me that poor gelato got neglected.  We had pandoro and panettone practically every day.  I think I prefer the delicate vanilla-scented pandoro, with its powdered sugar dusting, to the panettone, which is dotted with raisins.

In the week before Christmas, our daily pandoro was like a warm up exercise.  I had to be conditioned, my palate prepared, for the wonders that awaited me during the three (yes, three) days of Christmas festivities at Michela’s grandmother’s house.  Of the three days (the 24th, 25th, and 26th), Christmas Eve was the most impressive because everything was new to me.  It was the first time I met Michela’s nonna, aunts and uncles, cousins, the first time we set the table, had our first course, second course, third course, and desserts.  After that first experience, and for next week, when we ate often at Nonna Paula’s house, I fell into the routine with everyone else.

Christmas Eve’s dinner adhered to Roman Catholic tradition.  One is not supposed to eat meat on the “vigil” before Christmas, so we had the above pictured spaghetti, which had a tuna and tomato sauce, then we had the “fried” course: battered and fried artichokes, broccoli, mushrooms, and best of all, ricotta.  We then moved onto an enormous and delicious smoked salmon, served (dare I say, drizzled,) with olive oil and lemon, and tuna with roasted artichokes (which came in olive oil).  As you might imagine, my tongue felt silken after this dinner.

But Italian dinners have an inherent logic, and to cut through the oil slick before the real desserts we attacked a basket of oranges, clementines, walnuts, acorns, and almonds.  I was excited to crack my first acorn, thinking back to My Side of the Mountain, when the runaway boy makes pancakes with acorn flour.  Then it was “Andiamo con i dolci!” at the behest of Michela’s uncle Daniele, whose opera-singer’s voice left no buts about it.

On Christmas day we got to hear that voice sing opera!  Carla, Michela’s aunt, started it off, while still wearing her dishwashing gloves.  Then Daniele took over, and then we were treated to a duet!

Later, we sang “White Christmas,” “Jingle Bell Rock,” “Happy Xmas, War Is Over,” and I taught the cousins the round “I’ve been waiting all the day long to see the stars in your eyes…”  Much of the next week I spent with Michela’s family, eating, playing cards, singing, and finally, wandering through the incredibly crowded Piazza Navona on the Sunday before we left, eating pizza and gelato.

The Christmas market at Piazza Navona, with My Pretty Pony, Spongebob, and Bernini in attendence. 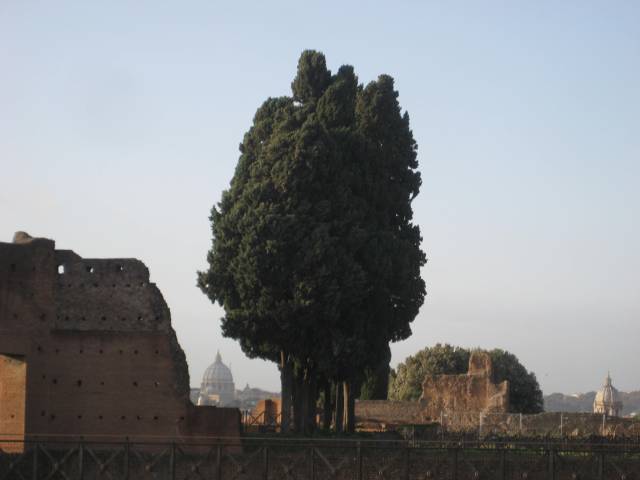 One of my favorite days in Rome was spent on the Palatine Hill.

Senior Project Manager at The Working World, a non-profit CDFI with an investment fund that focuses on loans and equity investments for worker-owned cooperative businesses. Recently graduated with an MA in Urban and Environmental Policy and Planning from Tufts University. Formerly Executive Director of the BerkShares local currency program in Western Massachusetts and Director of Programs at the Schumacher Center for a New Economics. Former line cook and prep cook at Txikito Cocina Vasca. Writer, teacher, and traveler.
View all posts by adventuresofaleece →
This entry was posted in Uncategorized and tagged Barcelonnette, Mouth of Truth, Nice, Palatine Hill, pandoro, Piazza Navona, Rome, Saint André les Alpes, Spanish Steps, suppli, tourte aux blettes, Vatican. Bookmark the permalink.

13 Responses to Christmas in a foreign clime