On A Marché Sur La Lune

Posted on October 10, 2010 by adventuresofaleece

My first weekend in Barcelonnette left nothing to be desired except for hiking boots.  On Saturday I made it to the market, despite sleeping rather late.  My Roman housemate Michela and I headed over together and I discovered that the usual problem at farmers markets applied: how do you decide whom to buy from?  In France, the problem is exacerbated because vendors label their wares very haphazardly. Luckily, the history teacher at the high school, Grégory, was there to advise me.  He pointed out the vendors who only ever have seasonal vegetables and fruits, the ones who drive their goods to the market straight from their farm.  He confirmed one of my long-standing suspicions about French farmers markets—that some of the vendors are really just distributors who get their produce from anywhere (and often can be found selling bananas and pineapples in the Alps).  He also directed me to Monsieur Jean-Charles Rampinini, the certified organic “apiculteur” who makes his honey right here in the Vallée de l’Ubaye.  Along with the honey, we bought potatoes, tomatoes, zucchini, onions and carrots to last us the week and some picnic supplies for later that afternoon, for we had made plans to explore the valley with the other two Italian assistants, Francesca and Mariangela and their visiting friends Mattia and Matteo.

The six of us had concocted these plans over dinner the night before at the apartment that Michela and I share.  Michela made delicious pasta carbonara and I made a tarte tatin.  I had improvised every step of the way with the tarte—from buying the apples to flipping it upside down to get it out of the (oval) baking dish onto the (tiny) cutting board—and so had worried every step of the way, too.  But it turned out so well that it led to inquiries in Italian about my eligibility for marriage.  Needless to say, I was extremely pleased.  The neighbors were not so pleased with our dinner, though, because we got word later they called our superintendent complaining that we had a party, “windows open, music playing,” until 11:30 at night!  The exaggeration of their claims (we did not have the windows open and weren’t loud) indicates that they were probably just jealous.

Our plan for the day on Saturday was vague: we’d take Matia and Francesca’s cars to St. Paul, a town further up the valley, and have lunch.  We ended up at what seemed the very top of the valley, where the Ubaye is reduced to a thin channel between two mountains and the road hops across it on the Pont du Châtelet, which was built in the 1880s and sabotaged during World War II.  We had a picnic lunch in a sheep pasture, facing SW down the valley.  It seems that, in this land of isolated and steep hillside pastures, sheep farmers transport their sheep from barn to pasture in big trailers.  The sheep must be quite accustomed to it because the noisiest part of the whole process, which took place just over the hill from us, was the truck laboring up the hill.

After the picnic we climbed up to the bridge for a photo op, but once we started going up we seemed unable to stop, for along came a shuttle van driven by a young resident of Barcelonnette and in we jumped.  We wound our way up and up to Fouillouse, a sort of ghost town where only one family lives year-round, according to Grégorie.  The only people we saw were an old couple who sold me post cards and stamps.  On the way out I stuck a hastily-composed post card in the post box.  I wanted to see how long it took to reach South Egremont, MA.  It’s nice when a “plan” is really just the starting point for unforeseen adventures.

On Sunday Grégory had invited us on a hike with his visiting friends from Marseille. In this case I knew we would have an adventure, what I didn’t know was that it would last five hours!  On our way up the trail, when we still had 4.5 hours of hiking ahead of us and I explained that I had never done a hike of more than 2 hours, I learned that the phrase “baptism by fire” is used in both French and English. 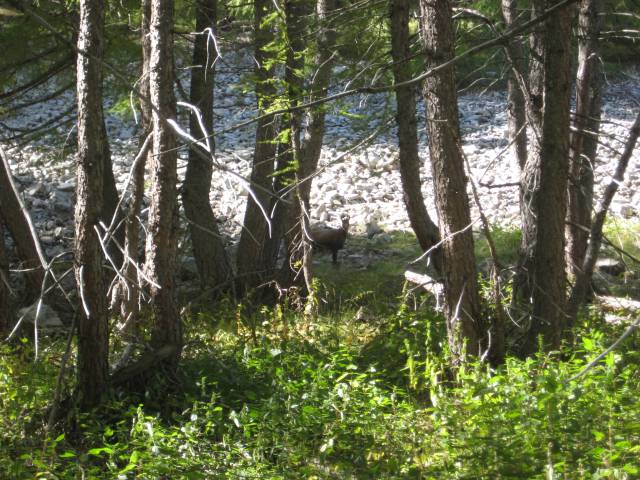 I have never been on a hike that includes so many different landscapes.  We started off in woods that felt familiar enough, except for the tinkling of cowbells and the gaze of mamma and baby cows through the trees.  As we got higher we came to areas where rockslides had cut through the forest and only young trees grew.  We found wild raspberries and spotted a pair of chamois–“sure-footed goat antelopes”.  And then we began our trek through marmot land.  The valley was so desolate and windblown that I in my blue green and purple borrowed hiking boots felt like Tintin, walking on the moon. 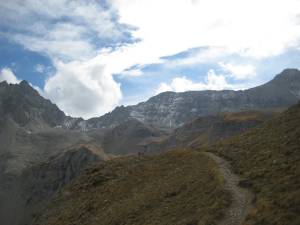 It was only after a leisurely and chilly picnic and another 45 minutes or so that we reached the “col,” or pass, which I thought was our objective.  When Grégory started to lead us down into the valley on the other side I began to worry, “how are we going to make it back before night?”  After much reflection I concluded that somehow we were actually going to make a circle so that we wouldn’t have to backtrack.  Of course everyone else already knew that.  We made our way back to the car past waterfalls and through pine trees that turn yellow and lose their needles in the fall. 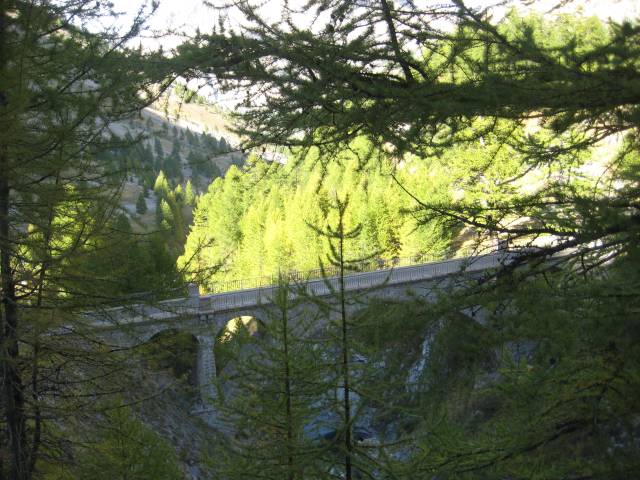 Senior Project Manager at The Working World, a non-profit CDFI with an investment fund that focuses on loans and equity investments for worker-owned cooperative businesses. Recently graduated with an MA in Urban and Environmental Policy and Planning from Tufts University. Formerly Executive Director of the BerkShares local currency program in Western Massachusetts and Director of Programs at the Schumacher Center for a New Economics. Former line cook and prep cook at Txikito Cocina Vasca. Writer, teacher, and traveler.
View all posts by adventuresofaleece →
This entry was posted in Uncategorized and tagged Barcelonnette, Parc Mercantour. Bookmark the permalink.

5 Responses to On A Marché Sur La Lune